1) Call to Order:  The meeting was called to order by Marilyn Mammano, President at 7:32 PM.

3) Announcement: Made by President Mammano welcoming a new, and happy to have, members Richard Bazerghi and Ralph Hamaker, from the Galt Mile Community Association.

4) Review and Acceptance of Minutes: A motion to accept the minutes from December, 2013, January, February, and March, 2014 was made by Ann Hilmer and seconded by Betty Shelley. Unanimously approved. Minutes for April, 2014 were deferred.

6) Police/Fire Report: Sargent Michael Siekierski, with the FLPD gave his report:  Flyers were handed out for the Great American Beach Party to be held on May 24, 10AM to 8:30 PM    http://www.fortlauderdale.gov/GABP/index.htm  Police will be triple staffed for the event Friday thru Monday. Saturday A1A will be closed at Las Olas from 6:30AM to 1:00AM on Sunday morning. The Broward County Sheriff’s Office with have a checkpoint setup on the 17th Street Causeway on Sunday, exact location unknown.

7) Additional Comments on the Beach Party: The Sun Trolley, Water Taxi and a bicycle valet will be available on Saturday for the event.

8) New Business:  The Board will discuss a candidates meeting for the August agenda.  June meeting: Convention Center presentation, Hands only CPR demonstration. A motion was made to cancel the July meeting by Ron Centamore, seconded by Jackson Boren  and unanimously approved. The election for the recording secretary was held and Steve Stahl volunteered.  Chuck Black made the motion that Steve Stahl be nominated and the motion was seconded by Brucie Cummings and Steve Stahl was elected to the position.

9) Legislative  Reports:  Richard Johns reported that sand replenishment legislation to be addressed on November 1st.  $2 million has been appropriated for a water taxi stop at Birch State Park. Short term rentals did not fare well and hope for a local take over next year. Joshua Freeman stated that the legislation for the short term rentals will easily pass the senate, but there are problems in the house. He also passed out Maria Sach’s legislative wrap up booklet for district 34 and an announcement for a veteran’s event to be held on June 11th in Fort Lauderdale. (Information: 561-279-1427)

10)  Presentation of SmartWater: Laura Croscenco reported that the City Commission approved the expenditure of police confiscated property funds for 500 free SmartWater kits to be distributed in Middle River Terrace at a cost of $15,000. There are also metal signs available for mounting on a post or fence for $30 each. Distribution to begin on June 29th.

11) Floodplain Management: Todd Hiteshew, Environmental Services Manager along with Dr. Nancy Gassman, Sustainability Manager discussed several issues concerning FEMA ordinances that will change the standards for low base flood elevations higher than 4 foot. 1 foot in height will be added to the current safety factor. The new ordinance will prohibit the use of fill material for raising structures, although it may be used on thin wall construction. Add-ons with 50% of the value of the existing structure must comply with all new requirements. Bridges being worked on may be raised slightly, but most will remain the same. Flood maps are due to be official 8/18/2014. See the Civic Associations website: City Events for more information. Or go to: http://www.fortlauderdale.gov/hurricane/hurr_flood.htm

An ongoing effort to plan and install flapper type valves to protect against street flooding on high tides. An effort is being made to choose the best design and lowest maintenance cost of the valves. Contact and Support City Commissioner Bruce Roberts and a County Commissioner Chip LaMarca in their efforts working on these issues.

12) New Street Naming Policy: Diana Alarcon is asking for support with the new policy she is soon to present to the City Commission for approval. She pointed out a couple of major points in the new proposal: A name change must be made on existing signage and that 70% of the residents must approve the change.  Also, the existing name will remain at the top due to the needs of the postal service to accurately deliver the mail and the new name will be in smaller type on the bottom. She asked that any requests that you have to contact her at Transportation and Mobility Dept. – [email protected] A motion to support made by Ron Centamore, seconded by Barbara Magill was approved unanimously.

13) Old Business:  Issues brought up at the Town Hall Meeting on Juvenile issues. Betty Shelley stated that 60 – 70 individuals are responsible for the crime problem. Chief Frank Adderley spoke and stated that the judges and the juvenile justice department are protective of the juveniles. And the first offenders without correction are destined to be one of the 60 – 70 problem individuals.

We Marched in the Parade 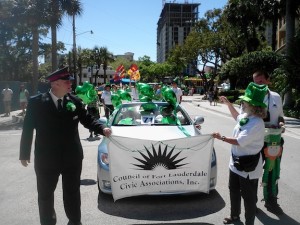 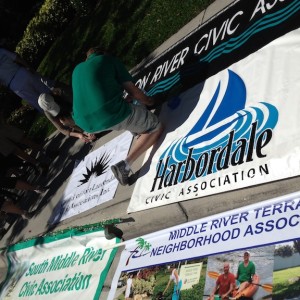 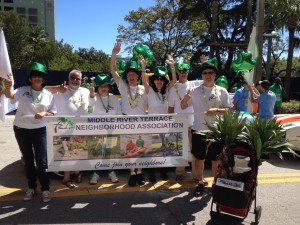 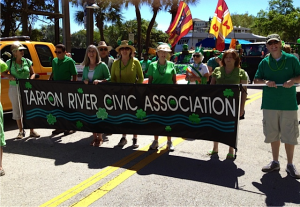 Ladies all dressed up 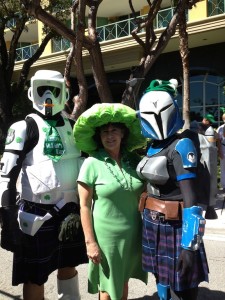 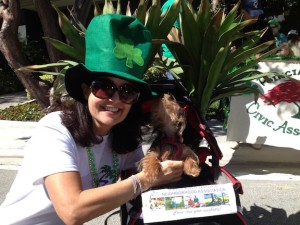 1) Call to Order:  The meeting was called to order by Marilyn Mammano, President at 5:35 PM.

3) New Business: A discussion took place on the items to have at our future general meetings:

4) June General Meeting: We will Invite Yvonne Garth of Garth Associates to give us a Convention Center Presentation to discuss the 4 options, building design, traffic congestion, street extensions, etc.  Also an update on All Aboard Florida Quiet Zones and Marine concerns with bridge closings. Steve agreed to take point on these issues.

6) Future items with dates to be determined: –Ralph Page with Broward County Crime Stoppers to discuss their operation with the police department and raids-on-line. –Julia Roberts, to discuss an update of last year’s report regarding school repurposing, also with the appropriation to come of a proposed 800 million dollar  bond for the schools, raise questions concerning the disposition of schools that have been closed, and what has been saved in doing so. –Social Services Rehab Facilities, raise questions concerning higher densities in some neighborhoods and not evenly distributed across the city and Sober Houses legislation that would have required a license to operate.  Ray Dettman agreed to take point on these issues.

7) Announcement:  The Association now has 45 members.

3) Review and Acceptance of the Minutes:  Minutes of the December, January and February meetings were distributed but not voted on.  March meeting minutes were deferred.

County Commissioner Chip LaMarca was introduced and answered some questions about the Convention Center Expasion Plan.

Members were urged to attend the Public Meeting on the Convention Center Expansion Plans on April 22. This is a significant project because of the traffic impact it will have on the surrounding neighborhoods and a signature project for the City.

The President explained the City Priority Action Plan and its relationship to our goals and priorities were discussed.

Membership renewals are coming in. Please update the information regarding representatives and alternates.

Richard Johns gave the update on SB356 and HB307. The membership was also made aware of legislation regarding Sober Houses that was working its way as well

The proposed “Public Participation Ordinance” was disused. The Committee felt that the latest draft was acceptable but no vote was taken.  Members wanted to let the City Commission know that this was not inclusive of all our issues.

Shannon Hamerling has resigned as recording secretary. Volunteers for the position are asked to contact the Board and an election will be held at the May meeting.

1) Call to Order:  The meeting was called to order by President Marilyn Mammano at 7:30 PM.

3) Review and Acceptance of the Minutes:  Minutes of the December, January and February Meetings were deferred.

Cate McCaffery Assistant Parks and Recreation Director presented the three ordinances that are currently being considered by the City Commission regarding loitering, street signs and homeless feeding programs. Members had many questions and comments. The general feeling was supportive.

Pam Adams, who is a consultant with the Broward MPO, discussed the public outreach efforts being made to get input into the MPO’s long-range transportation plan.  It is called “Speak Up Broward” and she will provide speakers to come to civic association meetings.

St Patrick’s Day Parade was a big success and photos were displayed of the neighborhoods that participated. They will be posted at CFLCA.org.

The Public Meetings Ordinance was discussed and it was pointed out that members need to renew their recognition paperwork with the City because only “Recognized” civics are provided notice.

Awards w ere given to the winners of the Neighbor Support Night for most attendance.

VP Ron Centamore has sent out the applications for renewal to all representatives and presidents. Please get your renewal information and dues in before April 1.

SB356 and HB307 are moving in committees. The Committee is monitoring progress and facilitating the sending of letters and emails to the various committee members in support.

The Board is planning a program on Juvenile Justice for the fall. We want to focus not just on Juvenile crime but all programs to help our youth avoid entering the criminal justice system.

Elections were held for the position of District 2 Representative.  The volunteers were Chuck Black and Steve Sthal.  Chuck Black won the election.

6) Guest Introductions:  Ms Molly Mc Kay, Project Manger for Willdan Financial Consultants gave a presentation about the Comprehensive Economic Development Plan. Mr. Al Battle from the City spoke about the process. Members were concerned about the infrastructure limits on economic development. Mr. Battle said they would come back to us with preliminary results.

7) President’s Report: Members of the Public Participation Committee met with Ella Parker and agreed to a direction forward on the ordinance.  Notice will be given prior to the DRC meeting and a required meeting between the developer and the neighborhood will be held prior to Planning and Zoning. The Committee will bring back a recommendation when the final language is submitted.

Membership Committee: Ron Centamore sent out the membership renewals, which are due back by April 1. Members were reminded to renew their City Recognition applications with Maxine Shing.

Legislative Committee: SB 356 is moving well through the Legislative process in Tallahassee. Senator Sacks is a co sponsor. Progress on companion bill HB307 is less certain. Representative Moraitas is a cosponsor.

Neighbor Support Night: February11 is Neighbor Support night and we want to get the word out to all our members. This will coincide with our regularly scheduled February General membership Meeting.  Hal Barnes spoke about the event. There will be a contest to see which association brings the most people. Prizes will be given. Doug Sterner is our point person on the event.

9) Old Business: Members were asked by Jim Moyer from the Salvation Army to support an ordinance regarding clothing donation boxes similar to that adopted by Miramar. The Board will discuss this and come back with a recommendation.

10) New Business: Molly Huges, President of Sailboat Bend presented information about the Historic District that was the subject of a joint workshop between the Historic Preservation Board and The City Commission. She distributed material about the Civic Association’s position.  Members can get copies by contacting her directly.

11) For the Good of the Community: Climate adaptation and Open House

1) Call to Order:  The meeting was called to order by Marilyn Mammano, President 8:30 after an extended Meet and Greet

There were no guests and the members had a discussion of issues and potential programs for the New Year. Juvenile justice seemed to be the number one issue. Other issues were Sober Houses; transient rentals, code enforcement and homelessness. We will work on a program for Juveniles

The meeting was adjourned at 9:00 pm

REVIEW AND ACCEPTANCE Of Meeting Minutes*

Board Meeting with Chief Adderley regarding Juvenile Crime

Status of Quiet Zones for All Aboard Florida