On 3/9/21 the CFLCA General Membership approved the appointment of Marilyn Mammano and Jim Concannon to the nominating committee as required by our bylaws.

Enclosed please find the CFLCA Board motion approved last night, which supports more stringent measures be taken by the City of Fort Lauderdale in response to COVID-19.

Thank you for your public service and please do not hesitate to contact CFLCA with any questions.

The Council of Fort Lauderdale Civic Associations, Inc. (“CFLCA”) is a coalition primarily of Civic and
Homeowner Associations recognized by the City of Fort Lauderdale. The CFLCA maintains a “focus on
the issues relating to preservation of the present and future welfare of the City of Fort Lauderdale and its
neighborhoods and citizens, be proactive and reactive to those issues, communicate any recommendations
to the proper authorities, strive to ever improve communication and create a stronger partnership between
City Government and the neighborhoods.”

On January 14th, 2020 the CFLCA held a General Meeting at the Fort Lauderdale City Hall. Quorum
requirements were met.

SB 1128 (Diaz) and HB 1011: “Vacation Rentals; Preempting the regulation of vacation rentals to the
state; prohibiting a local law, ordinance, or regulation from allowing or requiring inspections or licensing
of vacation rentals, etc.” was discussed in the company of Fort Lauderdale City Manager Chris
Lagerbloom. Upon close of the discussion and after a vote it was established that:

We commend all those who have voted in opposition to this legislation and applaud continued efforts to
amend existing language to maintain current local ordinances, protecting the ability of local municipalities
to regulate vacation rentals. Regulation by local government rather than via statewide law best serves the
needs of our neighborhoods and its citizens. The grandfathered in regulations passed by cities and counties
before 2011 do not reflect today’s short-term vacation rental issues, and warrant further review.

On January 14th, 2020 the CFLCA held a General Meeting at the Fort Lauderdale City Hall. Quorum
requirements were met. In attendance was Kyle Stevens, Managing Consultant, Stantec. Mr. Stevens
provided the General Membership with a presentation on the “Stormwater Rate Study.”

Upon completion of his presentation a question & answer session was conducted. At the close of
discussion and after a vote it was established that: The CFLCA general membership is in support of
the hybrid methodology which will support stormwater system and improvements

The following three (3) associations had a representative in attendance and voted in opposition of the
hybrid methodology: Central Beach Alliance, Downtown Fort Lauderdale Civic Association, and Victoria
Park Civic Association.

The matter of the proposed ILA between the City of Fort Lauderdale and Broward MPO was again discussed at length as it is a matter of great concern to our members.

Upon close of discussion the CFLCA Board of Directors unanimously voted to make the following request to City Officials.

Now that the proposed ILA between the City of Fort Lauderdale and Broward MPO is on hold pending additional discussion & negotiations the CFLCA Board of Directors respectfully requests that the attached “Suggested Continuing Responsibilities of the Transportation & Mobility Department” be incorporated into the ILA discussion/negotiation.

This request is in addition to the request we made for the following which have yet to be fulfilled:  “that City expeditiously hire a full time dedicated Transportation and Mobility Director for the Transportation and Mobility Department and provide the organizational chart/visual chart referenced in by City Manager Lagerbloom at the August 22nd special meeting to CFLCA President as soon as possible.”

Requested materials and responses to this correspondence should be email directed to Colleen Lockwood, CFLCA President, at [email protected].

of the Transportation & Mobility Department

You can download the the following letter that was sent to the Commission on August 10.   Sober Homes Letter 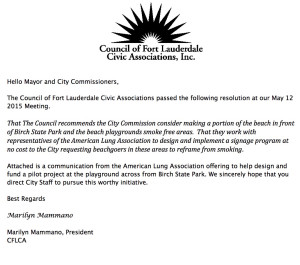