The Fort Lauderdale Education Advisory Board sent a communication to the City Commission expressing concern that the Board Oversight Committee did not appear to have sufficient community representation. CFLCA sent a letter to the Broward School Superintendent supporting the EAB’s position.

POSITION STATEMENT:  Fort Lauderdale is defined by its unique and diverse neighborhoods

GOAL:  Enhance the quality of life for neighbors and preserve the diversity of neighborhoods.

PROCESS:  Assemble concerns of member neighborhoods.  In November an “issues congress” will be held by the Council to finalize the definition of all issues in this quality of life exercise.  Once complete and adopted by the Council, the project will be presented to the City Commission, the City Manager, and the Visioning Committee for the purposes of prioritization, planning, budgeting, and staff resource allocation.

There are many issues managed by organizations other than the City of Fort Lauderdale that have a direct impact on the quality of life with our neighborhoods.  It is assumed that the City of Fort Lauderdale would exercise every option to enhance things like education and the arts to enhance the life of its citizens.  Other issues like traffic, airport and port management, the hospital system and business development incentives require proactive interaction by the City in order to maximize the results for neighbors.

Redevelopment has entered some neighborhoods at a cost to the quality of life.  Growth and the absence of action have resulted in neighborhood cut through traffic.  The volume, speed and presence have impacted the ability of residents to safely walk and cycle.  The system of sidewalks and bike paths is incomplete and inadequate.

Maintenance and repair of infrastructure is insufficient.  Lack of routine replacement has caused catatrosphic failure, neighborhood impact on health and safety, and cessation of services.  In addition, the decline in maintenance has negatively impacted businesses in the City which serve neighborhoods.  The process by which repair and maintenance is scheduled does not factor elements, traffic, opportunity costs and other causal elements in the prioritization process.  Public transportation is not currently a viable option for Fort Lauderdale neighbors.

The Council published a Parks position paper February 2009.  It was re-issued in 2011.  The report is attached.  The cornerstone of the report was a “no net loss” policy.  Public spaces set the tone for the neighborhood and are an indicator of the health of the City.

Crimes by youths and the ‘underserved’ increase and impact the quality of life for all residents.  Youth services and education are critical components to turn around the trend.

Improvement of response time and effectiveness of response presents a cost saving opportunity.

Partnering for a result is a change neighbors would welcome.  Proactive and progressive code/ordinance changes incorporating incentives would benefit both the residential and business community. 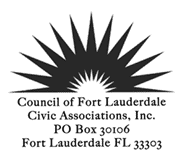 Subject All Aboard Florida

The Council of Fort Lauderdale Civic Associations is a coalition of homeowner and civic associations in Fort Lauderdale.  We have been following the progress of various transportation projects along the Florida East Coast Railroad. We understand that the All Aboard Florida Project will increase the number of trains transiting through Fort Lauderdale and facilitate even additional train traffic with the introduction of commuter rail service in the future and increased freight train traffic associated with improvements at Port Everglades.

The Council is devoted to maintaining and improving the quality of life for our residents. Mass transit improvements will increase mobility, reduce congestion, create jobs and protect the environment. These are all worthy goals that we endorse. However, every project has consequences and the Environmental Impact Statement must identity these consequences and possible mitigation actions.

Based on input from our members at various meetings there are a number of issues that must be addressed in the scoping of the Environmental Impact Statement (EIS) for the project.

1. As the increased train traffic passes through Fort Lauderdale and adjacent to residential neighborhoods the noise impacts must be addressed. We understand that “quiet zones” have been discussed to mitigate this impact but have no information regarding their effectiveness or cost. The EIS should consider the cost of implementing “quiet zones”, who will pay for them and maintain them?

2. As increased train traffic passes through Fort Lauderdale there will be and increase in the wait time at the grade crossings. What will the impact be on emergency service vehicles, police and fire services? Does the City have sufficient infrastructure located on both sides of the tracks to handle these issues or will an interruption of services cause harm to the public.

3. As increased train traffic passes through Fort Lauderdale, what provisions are being made to protect pedestrians and motorists from accidents at railroad crossing?

4. As increased train traffic passes through Fort Lauderdale, recreational boaters living in western neighborhoods will experience significant and potentially dangerous delays at the railroad bridge across the New River. What provisions are proposed to deal with this issue?

With all of these issues, the EIS should address the responsibility of the private operator to contribute to the cost of mitigation. Also what level of government, Federal, State, County or Local will be responsible for implementing and funding the mitigation?  There should also be consideration of impacts associated with other projects that are likely to be facilitated by All Aboard Florida.

Consideration of these issues is imperative. We hope that the EIS will provide definitive answers to these questions.

At June 12 General Membership Meeting of the Council of Fort Lauderdale Civic Associations, the members voted to send this correspondence to you regarding the proposed changes to the City-Wide Parking Regulations.

Regarding the draft proposal that the City presented at a May 22 Public Meeting, we don’t believe that the one-size fits all approach taken by the City is appropriate. Parking regulations should be more nuanced and specific to their location. While some neighborhoods would benefit from reduced parking requirements for some uses, others may be overwhelmed by inadequate requirements.

I will be at the June 20 Planning and Zoning Board meeting and will be happy to answer any of your questions.

Department of Transportation and Mobility

In accordance with a unanimous vote of the General Membership, the following resolution was transmitted to the Mayor, Commission and staff.

WHEREAS, the State of Florida has passed HOUSE BILL 529, “The Consumer Broadband Choice Act of 2007”, that authorizes the State of Florida to grant state-issued franchises to AT&T and any number of other telecommunication companies for the intended purpose of allowing these companies to provide Florida residents with competitively priced DSL and cable TV services; and

WHEREAS, the unregulated unsightly appearance and location of the telecommunication equipment used to provide these services has and will have a profound negative impact on the safety along our public rights-of-way, the appearance of neighborhoods, and property values throughout Fort Lauderdale.

NOW THEREFORE, be it resolved by the Council of Fort Lauderdale Civic Associations:

That the Council formally objects to the unsightly appearance and location of the telecommunication equipment that has already been constructed on both public and private property in the City of Fort Lauderdale; and

That the Council fully supports the City of Fort Lauderdale’s anticipated creation of an Ordinance to regulate the appearance and location, on both public and private property, of all telecommunication equipment, both existing and planned, authorized by House Bill 529, in order to minimize the negative impact this equipment will have on the safety along our public rights-of way, the appearance of our neighborhoods and property values; and

That the Council formally requests that the aforementioned Ordinance include a requirement that all telecommunication equipment authorized by House Bill 529, be placed on poles or underground whenever possible; and

That the Council formally requests that the aforementioned Ordinance include a requirement that all telecommunication companies in the process of planning the construction of this equipment be required to consult with appropriate neighborhood representatives and property owners prior to receiving a permit for construction of the planned equipment, in order to ensure a minimal impact on the proposed location.

At the July 12, 2005 Council of Fort Lauderdale Civic Associations meeting, Mr. John Terrell, Marine Advisory Board Chair, presented the findings of that Board on the proposed change of use to allow commercial rental of dockage for the Las Olas Marina which would reduce the recreational use of the facility.